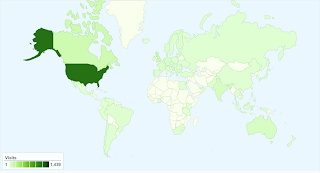 Okay, this is a surprise. I've been writing this under the idea that I'd have some small portion of my friends and family reading. And maybe the occasional Google search. I figured that's where the one comment I've had came from. Then, today, I did a little log analysis.

Since I opened the site a couple of weeks ago, I've had 2,490 visits from all over the world, from Malaysia to Tanzania. The visitors are pretty telling of the type of audience: 49% have been using Windows, 29% using Macs, and 21% using Linux. The browser numbers are more optimistic: 69% Firefox, 12% Safari, and only 7.5% using Internet Explorer.

I will point out that these numbers may well be skewed. The statistics were only collected for about 2/3 or less of the page views. In other words, I know that there's been at least 6,000 views, but only about 4,000 of those had statistics logged.

How did all this come about? Well, somebody found my post about Sawzall, and posted it to reddit. There was a little bit of activity before that, but I haven't yet looked at what led them to find it.

Then again, I never did publicize Vigor at all (I just sent Illiad an email), and enough people downloaded it that I was getting dozens of emails a day. I suppose even the most trivial writings are still going to be found by the zillions of eyes on the Internet.
Email Post
Labels: blog sawzall statistics vigor

Anonymous said…
/e looks around at all the eyes... blinks a bit... goes back to reading interesting blog.
1:15 PM