As I eagerly assembled it, I realized that I really don't know much about the ISS today, or what the different parts of the model were. Fortunately, with the help of NASA's excellent pamphlet Reference Guide to the International Space Station and Wikipedia, I was able to learn a whole lot!

The ISS is designed and assembled from the inside out, so that's a good way to look at it. The most interesting parts are right in the middle; these are the parts of the model that are mostly grey and black. I printed out this diagram for reference; these are the major habitable modules, and are really the best landmarks for getting around the ISS.

This photo shows how these are arranged on the model. I've also included a compass of sorts: forward is the front of the ISS, the direction that most of the LEGO box art shows as the front. Like on a ship, aft is the back, port is left, and starboard is right. The two new directions are the nadir, which points towards Earth; and the zenith, which points towards space. In the finished model, the zenith is up. 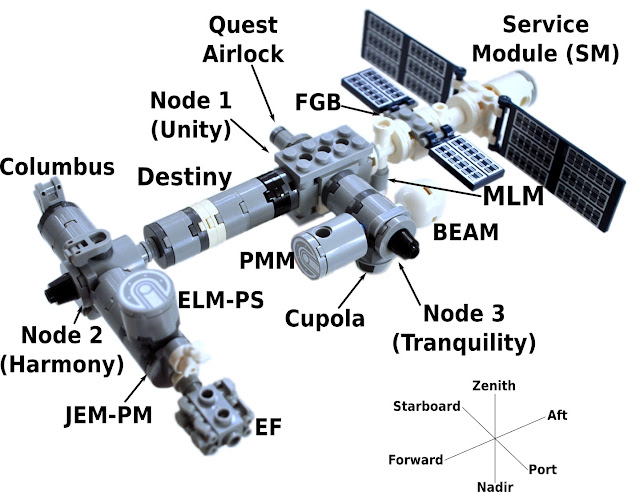 In this picture, I've labeled a couple of modules that aren't in the earlier diagram.

Node 3, aka Tranquility, has a couple of smaller modules attached: the Cupola is a little viewing area, like a bay window, that's attached to the nadir (Earth-facing) side of Tranquility. The Leonardo Permanent Multipurpose Module (PMM) is a storage module. The Bigelow Expandable Activity Module (BEAM) is an inflatable module; it's being used to test the concept of inflatable space modules.

The Japanese Experiment Module (JEM), often referred to as Kibō (きぼう), has several modules. The main one is a pressurized module (PM) where people work (that's the only one that's in my outline of the habitable sections). There's also a pressurized storage area called the Experiment Logistics Module - Pressurized Section (ELM-PS), and a part for experiments that are exposed to space called the Exposed Facility (EF). JEM also has a robot arm called the Remote Manipulator System (RMS) that's used to fiddle with experiments on the outside of the JEM module.

I labeled something that I think is the Nauka (Нау́ка) Multipurpose Laboratory Module (MLM). At the time the LEGO model was being designed, the MLM was scheduled to launch before the model hit the store shelves. But the MLM is perpetually “almost ready to launch,” having been postponed several times since the original launch date of 2007. However, I think that part of the model might actually be the Pirs (Пирс), a docking unit that's been part of the ISS since its early days. The Nauka is supposed to replace the Pirs when it launches, and that part of the model (a single round 1x1 open stud, 3062) looks a bit more like the Pirs than the Nauka MLM, so I might change my diagram.

The black and white parts of the Destiny module in that photo aren't part of the final build: they're placeholders for where the model connects to the truss. In reality, the truss is only connected at the zenith of Node 1, but the model needs more support because it has to deal with gravity.

If you build the model according to the instructions, it has five resupply vehicles docked: four Russian Progress vehicles, plus one Orbital Science Cygnus vehicle. 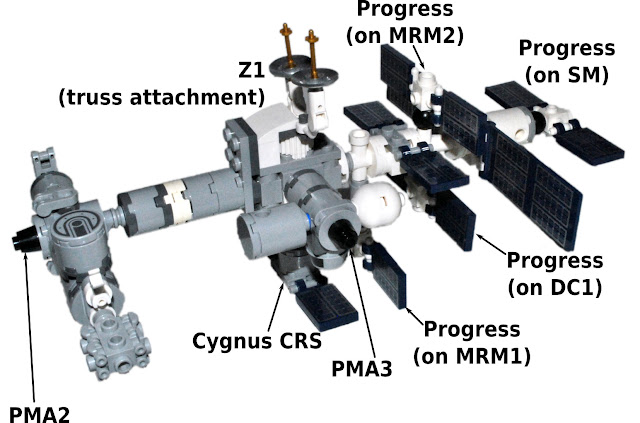 In this photo, I've also labeled the two docking ports that aren't occupied, PMA2 and PMA3. PMA1 is permanently connected between the FGB and Node 1.

I've also added the Z1 truss module (the bit with the two antennae), which is where the truss attaches to Node 1 (at the zenith port). This was the first part of the truss that was launched. In the model, Z1 also gets extra structural support from Destiny, and the truss also gets more support at the S0 attachment (the white stripe on Destiny in this picture).

In reality, there have never been four Progress vehicles docked; there are usually one or two. But that's okay, because it's fun! You can pretend that the Progress vehicles are Soyuz capsules instead (they're almost identical) and say that the ISS invited everybody over for a huge pizza party!

Most of the ISS's size is the truss structure. The truss's supports the solar panels, as well as many important experiment and support modules. 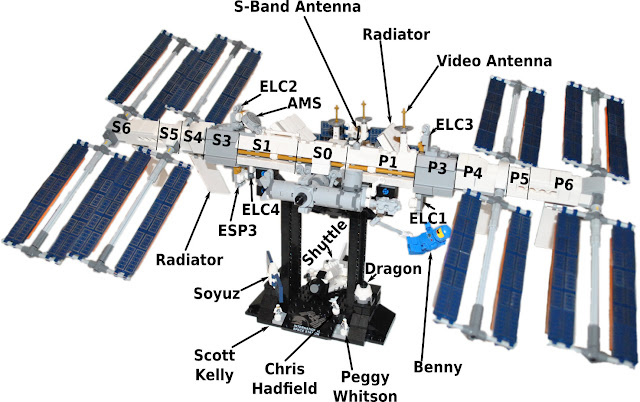 That's a lot of new things here, so let's start by orienting what we've seen already.

The pressurized parts of the ISS — what the previous photos show — are near the center of the model. You can't see much of them in this photo, but you can see the forward part — Columbus, Node 2, and the JEM — in the middle there as the grey part. The black docking adapter in the middle of Node 2 is PMA2. You can also see the two dish antennae from the Z1 module, not labeled in this picture.

In an earlier picture, I noted the Z1 module (mounted on the zenith port of Node 1). This is the only point where the pressurized parts of the ISS are connected to the truss. The Z1 truss module connects to S0, S0 connects to S1 and P1, and the connections go outwards from there. (In the model, the truss is connected not just at Z1, but also by two plates from Destiny, just forward and aft of S0. The model has to hold its weight more rigidly than the ISS!)

One of the small but utterly cool things in this picture is the Alpha Magnetic Spectrometer (AMS). This is something that's about as important to cosmology as the Hubble Space Telescope. The AMS measures and categorizes cosmic rays, which is how we're currently working to understand the nature of dark matter.

There are four ExPRESS Logistics Carrier (ELC) modules, which mostly hold experiments that don't need the astronauts to pay close attention to them. There's also one external stowage platform (ESP) module, which is pretty much a place to stow spare parts.

There are white panels extending aft from the solar panels, and two white wavy modules near the center. These are radiators, which are very important in space; without air, the ISS can't get rid of its heat by other means. (There's a good discussion of this in the book What If?, in the chapter “How long could a nuclear submarine last in orbit?”) The ISS can't just use air vents to get rid of its excess heat, so it needs to have giant radiators.

The model nominally comes with two astronauts (34959, the same ones as came with the Saturn V model), which are pretty close to scale with the model. Mine included a third astronaut as a spare piece. I arbitrarily decided these were Chris Hadfield (who does more to teach people about space than anybody else), Peggy Whitson (US record holder for time in space), and Scott Kelly (who commanded three ISS expeditions and was the subject of twin studies to figure out what effects space has).

There's a Soyuz spacecraft included, so you can send personnel to and from your LEGO ISS. The Soyuz manned spacecraft and the Progress unmanned resupply craft are nearly indistinguishable, which isn't surprising: the Progress is pretty much a Soyuz that's reworked for cargo instead of cosmonauts. In the model, the only difference is that the Soyuz has a conical top, while the Progress has a round top. In real life, they're not even that distinct from the outside.

Of course, there's a Space Shuttle orbital vehicle model included. The Space Shuttle has been retired for some time now, but it delivered much of the ISS to orbit. This was actually the original plan for the Shuttle: Nixon expected it to be a delivery vehicle for a space station. That was eventually designed as the Freedom space station, a Reagan-era plan. After the end of the Cold War, it was much more beneficial for all of Earth to work together to build the ISS. The ISS was built on the designs of Freedom and Mir, so much of the work was delivered from the Space Shuttle and Soyuz craft.

There aren't any models of the Japanese H-II Transfer Vehicle or the ESA's Automated Transfer Vehicle included. That's okay, though; they're easy enough to build: the HTV is pretty much just a cylinder, so you can make it from 2x2 round bricks (like 6143, or add in some 4032 plates for color). For the ATV, I'd probably use just a 30361 (don't be fooled by the picture in that link: it's the one with the pointed axle holder, like what's used in the Service Module in this model) by itself. If you want to deploy the ATV's solar panels, you'll have to steal a couple of the solar panels from your Progress vehicles, since that part (6309239) isn't around anywhere else yet; you'll also need to dig through your Technic collection to decide what you want to connect them with, but I might see if a 15100 can hold a 17715 in place.

The modules are a little smaller scale than the truss length implies: the Destiny module, at scale, should be 20 mm in diameter; the modules in the module are 16 mm. Your LEGO astronauts may be at a little bit cramped if you ask them to go into the modules, but not overly so.

I briefly considered mounting the model high enough so that, to scale, it was the right height above the Earth. The ISS orbits closer to the Earth than you might think; it's close enough to see with the naked eye. If the Earth was the size of a Frisbee, the ISS would orbit just a little away, the height of a LEGO brick. But a quick bit of math tells us that won't work out.

The ISS orbits at about 400 km (250 mi), so for me to mount it at scale height, it would need to be about 2 km (just over a mile) above sea level. Maybe somebody in Denver can pull that off; the top of Republic Plaza is about 1800 m above sea level, and I probably have some rounding errors in those numbers.


Advice for Doing This Research Yourself

A lot of this involved identifying one part of the model, then working out the stuff that's connected to it, and so forth going outward. Fortunately, the Reference Guide has great diagrams (especially pp. 43, 53, and 77), the ISS Wikipedia article's “Structure” section has a diagram for all the connections, and each module's Wikipedia page has links for each of the connected modules.

The Reference Guide's picture of the exploded structure shows both the modules and their connections, but is low-res in the PDF. NASA has a better one online, which I've reproduced here. 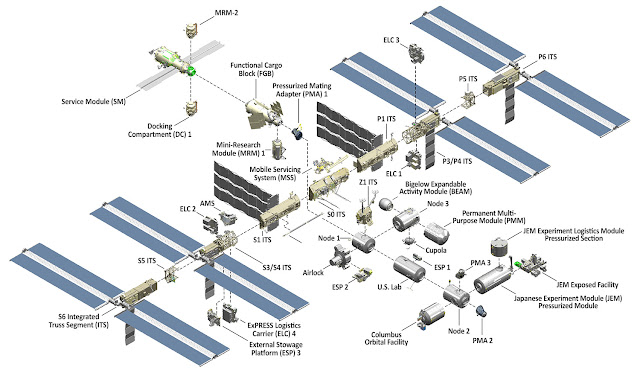 If you take this on yourself, note that a lot of the connected bits are Progress resupply ships. I discussed them earlier, but briefly: all the small vehicles connected with spheres are Progress ships, and aren't usually shown in most diagrams of the ISS.

Be careful about out-of-date information; the ISS is constantly being added onto and rearranged, and some places can't keep up. The model seems to be based on the expected configuration as of mid-2020. For instance, the MLM is in the model, although as of this writing, hasn't launched. (That part of the model might actually be Pirs, though.) There's also some bits in the model for more fun: the FGB's solar panels are deployed, there are more resupply vehicles than have ever been docked at the same time, and there's a Space Shuttle orbiter. Because it's fun!
Email Post
Labels: iss lego nasa space